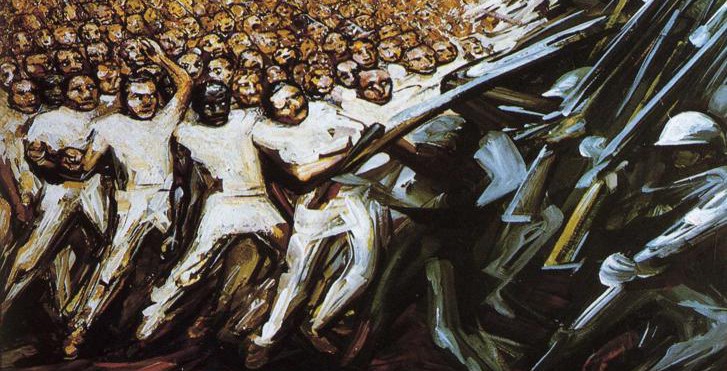 by Jeff Noonan More than one year after the last encampments were dismantled, no material trace of Occupy remains in the cities where it established itself.  In the corporate media–once breathless with speculation as to the movement’s origins and intentions and loud in its declamations of criticism—there is now only silence.  A movement which was portrayed as having come from nothing has, seemingly, returned to nothing, having changed nothing.  The very social problems it denounced– widening inequality, the tyranny of finance capital, the totalitarian power of the surveillance-security state, the subordination of  democracy to money-value: remain or are getting worse.  … END_OF_DOCUMENT_TOKEN_TO_BE_REPLACED

by Henry A. Giroux Young people are demonstrating all over the world against a variety of issues ranging from economic injustice and massive inequality to drastic cuts in education and public services. At the moment, these demonstrations are being met with state sanctioned violence and insults in the mainstream media rather than with informed dialogue, critical engagement and reformed policies. In the United States the state monopoly on the use ofviolence has intensified since the 1980s and in the process has been increasingly directed against young people, poor minorities, immigrants, and increasingly women. As the welfare state is hollowed out, … END_OF_DOCUMENT_TOKEN_TO_BE_REPLACED

by Uri Gordon  It cannot be enough to criticize capitalism, even from a distinctly anarchist point of view. Nor will it do to merely construct models of free and equal economic arrangements, no matter how inspiring and realistic. In addition to these, the discussion of anarchist economics must also involve a look at ways of getting from here to there. In other words, it requires that we examine anarchist economics in terms of concrete, present-day practices and assess their role within the more general context of anarchist revolutionary strategy. In this chapter I attempt to initiate such a discussion, by … END_OF_DOCUMENT_TOKEN_TO_BE_REPLACED